You are here: Home » Thinking » Staying Relevant Through Innovation at ATME

Eastbound on a flight from Chicago, where I was a guest speaker at the American Travel Marketing Executive (ATME) annual convention. One of three on a panel entitled “Staying Relevant Through Innovation,” I was encouraged by the engaged attendance of several hundred people and by their enthusiasm for the topic.  To stoke the fire, the moderator of our panel, Pamela Johnston, successively displayed four “inventions” on a big screen and after each asked us panelists to vote “yes” or “no” to the question “Were these inventions real,” i.e. had they actually been manufactured and marketed. 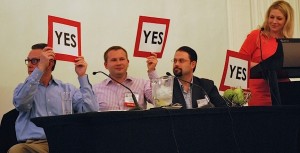 I voted “yes” on even the most absurd ideas, because recalling Einstein’s observation “If at first an idea is not absurd, there’s no hope for it,” this just seemed the right way to contribute to a panel on innovation.  As I hoped, this tack opened the way to make a crucial point about innovation, namely that it is a helluva lot easier to build feasibility into an absurdly new idea than it is to build newness into a feasible idea.  This is a fundament of Synectics, and I believe it is the doorway through which all breakthrough innovations pass.  A second reason that I used this strategy was that I had sensed through the day being concluded by our panel that the ATME crowd were stymied by innovation. Throughout the day, I had picked up an undercurrent of fear to take the kinds of risks with creative thought that could move the industry ahead. I heard a good deal about fear of failed experiments and inability to measure the ROIC on innovation.  After some reflection, I encourage the ATME Folks (and everyone else) to reframe “failed experiments.” In our work with thousands of clients on a myriad of problems and opportunities at Synecticsworld, we have learned that there are no “failed experiments.” There are only unexpected outcomes. In the service of creativity and innovation, we learn from these unexpected outcomes and use this learning to perfect our experiments.

As to the ROIC on taking the kinds of creative risks that lead to innovation, it is that your business survives and potentially thrives. The negative ROIC on innovation is a loss of relevancy epitomized by Kodak and soon likely by RIM.

In his excellent keynote address to the convention, Henry Harteveldt gave us a litany of topics for being relevant in travel.  I have taken the liberty of paraphrasing some of Henry’s observations as task headlines suitably framed for creative problem solving and innovation:

My big takeaway from the ATME convention?  The ultimate achievement of relevance is a brand that survives and thrives.  This calls for for creativity that sells, also known as innovation.