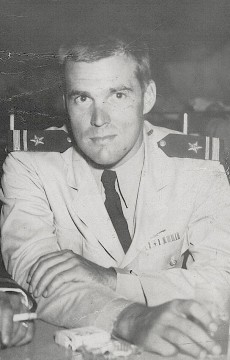 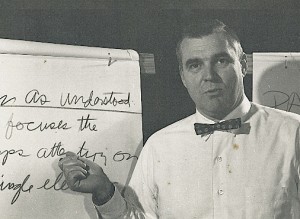 George M. Prince,  was one of the founders of Synectics and led the company for many decades, becoming a legend at Synecticsworld, starting with his bow ties, khaki shorts, and onto t-shirts, and boat shoes. George was a legend in the way he changed the way that people learn, behave, think, and interact.

Our founder, leader, and friend George Prince passed away on June 9th, 2009. George created Synecticsworld (Synectics Inc.) fifty years ago and changed the way people thought about the art of problem solving using creativity and innovative ideas. He created an innovation process and a body of knowledge that continues to flourish and grow. George’s inspiration and leadership has impacted not only those of us who have had the opportunity to work at Synecticsworld but thousands of clients located all over the world. If you have ever asked a spouse or a friend, what was behind their question or asked a colleague to say more about an idea they had, you are carrying George’s DNA through your life. There is no counting how many interactions, business and personal, that have been more positive, inspired and productive because of the work that George pioneered.

“Another word for creativity is courage”

“One of the objectives of Synectics processes and skills is to turn competitive energy into cooperative energy and thus make available more of the creative potential that resides in each of us.”

As long time Chairman of Synecticsworld, he and his partners originated the idea of videotaping invention groups to learn how the process of invention occurred. Based on their discoveries, they developed creativity courses and an innovation process that have been taught all over the world. In 1970, Prince published one of the early books about the process: The Practice of Creativity, Harper and Row, 1970. It became a best selling trade book.

George grew up in Rochester, New York and attended Exeter and Williams, where he graduated with honors. In World War II, he was an officer in the Navy and served in a Destroyer Escort in company with an aircraft carrier on antisubmarine operations in the North Atlantic.

George was the undeniable guiding light of Synecticsworld. His early work remains the core of everything we do today. Many of us have had the opportunity to know George and to learn and be guided directly. Many never have had the opportunity to meet George, but have been guided by his inspiration. He will always be our source of inspiration as we continue his work. He was a legend to each and every one of us.

We are proud that we will carry his legacy forward by our work at Synecticsworld. We are happy to have you join us in our celebration of George’s life and work and invite you to send your stories and recollections along to us.

You can learn more about George and see interviews  on our website or by going to georgemprince.com 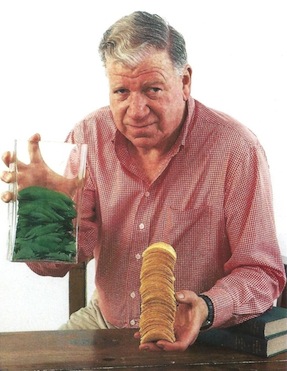 William J. J. Gordon (September 9, 1919 – June 30, 2003) was an early explorer of the system of creativity, he was an inventor and psychologist, who divided his time between the academic and business worlds. Between 1950 and 1960 he developed many commercial patents and was the leader of the Invention Design Group at Arthur D. Little.  Many of the elements of creativity being debated and confirmed by neuroscience today were uncovered long ago by the team led by Bill in the late 50s and early 60s. Bill’s curiosity and rigor helped build the system that today is the Synectics innovation process used by Fortune 500 companies around the world.  He described the process in his book SYNECTICS, The Development of Creative Capacity (New York 1960, Harper and Row).

“To achieve radical new approaches to old problems it is essential to take ‘psychological chances,’ to abandon familiar ways of looking at things, even to transcend one’s image of oneself.”

“The Synectics Process involves making the strange familiar and the familiar strange.”

The year the book was published, Bill Gordon and his colleagues George Prince, Dick Sperry and Carl Marden set up a new company called Synectics Inc. to focus on the discoveries they had been making about the innovation process as they worked together at ADL.  Bill Gordon left Synectics in the early 60’s to explore the application of Synectics to education and founded the Synectics Education Systems.  Bill dedicated his time to focus on creativity and education and also contributed to many periodicals, including the Harvard Business Review and Philosophical Review; he also wrote fiction for The New Yorker.

In 1965, Fortune magazine featured an article on Bill Gordon and Synectics.  Al Capp, the creator of Li’l Abner, was a close friend of Bill Gordon, and (as the article below indicates) was asked to evoke the spirit of a Synectics Invention session. 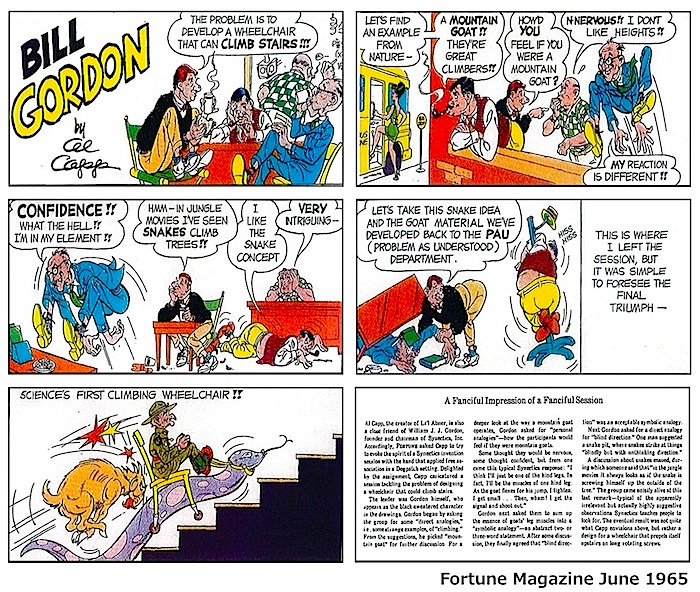 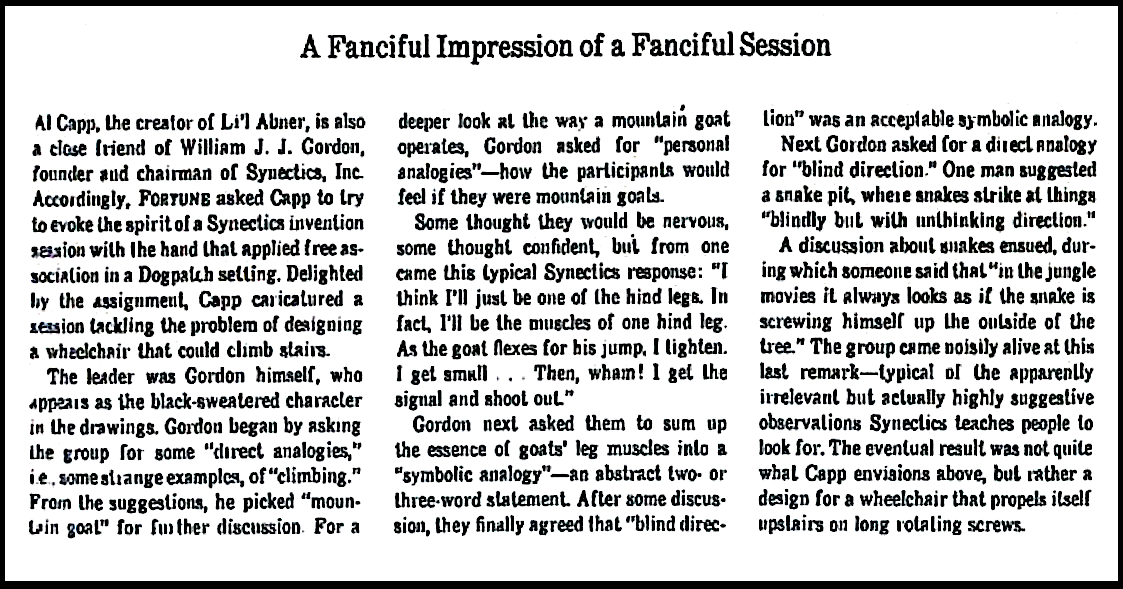 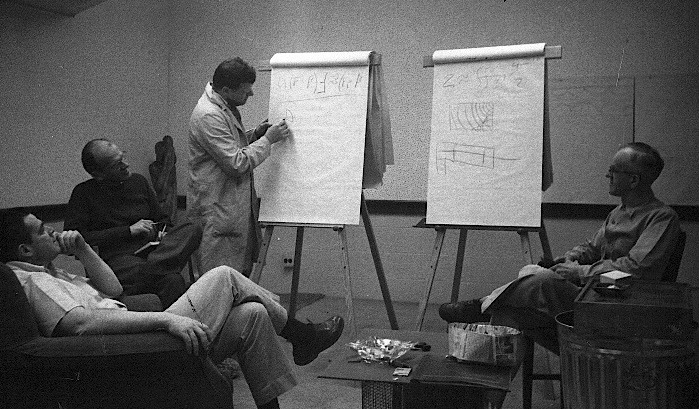