You are here: Home » Front Page » Exponential Innovation Through Synectics 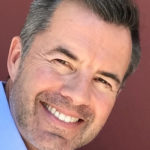 The possibilities for the future are enormous, pushed ever onward by the incredible explosion of exponential technologies such as Artificial Intelligence, IoT, Digital Manufacturing, Space Tech, Digital Biology, and the Extended Realities of Augmented and Virtual Reality. Today, the ability to create the world you imagine is greater than at any time in history. It is your imagination that is the key ingredient into harnessing the future.

I don’t know of any other technique as powerful as Synectics® in its ability to bring the minds of individuals and groups into a space where they can dream as widely as the opportunities the future holds.

Let me give you an example. We are sitting in a place today where some of our belief systems are starting to become less important or even go away altogether. Consider this, when you were young and couldn’t get home from a party, how many of your parents said “that’s okay, just get into a car with a stranger” Most of us do it today on a regular basis. That mantra of don’t get into a car with a stranger and the concept of stranger-danger has been, through the use of the small computers in our pockets and their networking abilities, designed away. Much as demon possession has been relegated to the annals of history through the exploration of mental illness.

When we look at the recent report from Uber on the number of sexual  assaults that occur during rides, a natural and understandable reaction is that number is too high, and for every victim of these awful crimes, one is too many. But we lose in the argument the fact that billions of times people have got into cars with strangers without an issue.

Similarly, with Airbnb we invite strangers into our homes to spend the night, a big no-no just 20 years ago.

I would recommend that everyone reads Yuval Noah Harari’s Sapiens and looks at how we have structured our societies with solutions to problems too complex to coordinate. We have done this through the creation of norms, rules, and belief systems, part of what Harari calls the inter-subjective reality. Now technologies have the power to break some of the long held beliefs, as they provide alternate solutions to complex problems. 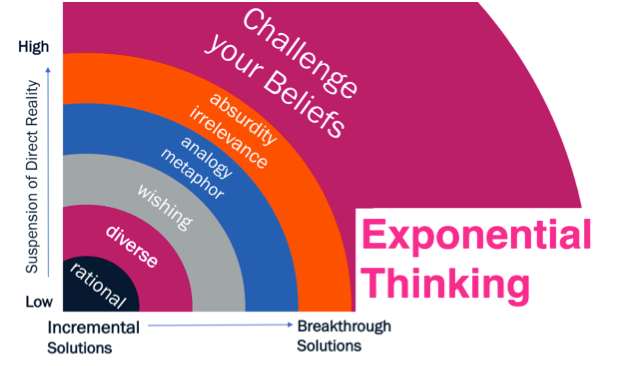 In Synectics®, teams are encouraged to move up the spectrum into the space of ideas that are “immoral, illegal, could get you fired” — this is the section above that is called “challenge your beliefs”. The idea is to break the belief systems that restrict our thinking, which is critical to seeing the rapidly approaching near-future, and the enormous opportunity that lies within.

Your teams are unlikely to get out to the “challenge your beliefs” part of the spectrum if they don’t have enough stimulation about the technological possibilities. Similarly, it is critical that they feel safe to explore.

Synectics® tools create a climate where people feel safe to explore as far as they need to get to breakthroughs, and are safe to challenge beliefs, so they can truly see the possible.

As you start down your path to digital transformation, Dream Big. You might not execute that big bold dream right away, but as Sundar Pichai, CEO of Alphabet said

“One of the great things about working on moonshots is even your failures along the side are worth something, and even interim milestones have other applications. So… we have to be patient. But there is a lot of real gratification along the way.”

We are going to be living into a truly incredible world, and as you start down your path, look to see all of the possible so that you can create the world we want to live into, not just from the sense of the immense opportunities for business, but also to solve global grand challenges.

If you are looking to see the future, scanning the horizon for the technologies and where they are pointing to, and combining that with a Synectics-based exploration will open your eyes to the immense, ground-breaking future possibles, just around the corner.