You are here: Home » Thinking » Tap into Your Unconscious Mind: Inside the Synectics Teepee 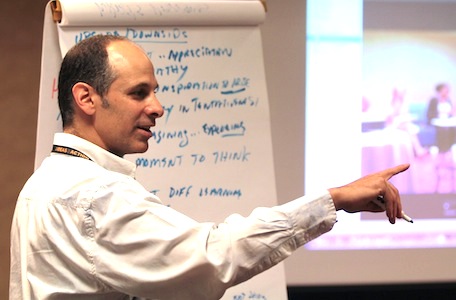 By most accounts,  the unconscious mind carries 90-99% of our thinking activity or ability, with our conscious mind delivering the balance. Oh, if we could just tap into that hidden reservoir!

At the Brisbane Festival, an extravaganza of the arts that takes hold of the city each year, I had the opportunity to tap into part of my own reservoir.  I’ll never forget walking just outside of our Brisbane office and discovering a remarkable fabric structure about 30 feet tall.  It looked like a teepee except that the top, instead of being closed to a point, opened back up to a circle like a window to the sky. 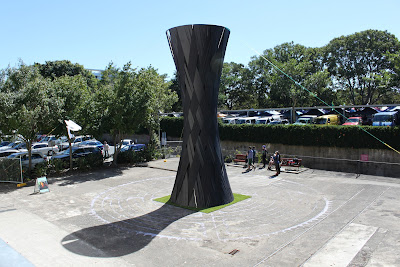 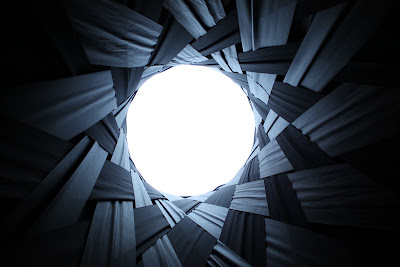 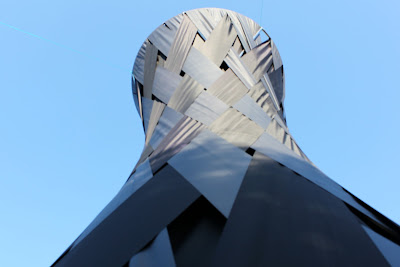 The artist, sculptor, and structure designer, Vanessa Stanley, who created the exhibit called it a “breathing space”.  The walls were made of dark fabric sashes running down diagonally and connecting the roughly 12-foot diameter rings at the top and bottom.  From the inside, the fabric inhaled and exhaled with the wind, alive and almost breathing.  It was dark inside, absent color except the light that shone in from the open top and from the translucent pattern of diamonds revealed through the fabric walls.  When you looked upward and cast your eyes upon the open sky, whatever past through the circle, whether clouds, a blue sunlit sky, or starlit night, was vivid and crystal clear.  The scarcity of sound and outside stimulus made it easy for one to go inward.  Both physically and metaphorically, the darkness made it easier to the see the light.  As I sat inside this bubble, a stream of connections began to flow in my mind about work, life, and family.  With the muting of physical senses came the quiet ability to connect deeply and “make sense” of things happening around me.

The experience reminded me of a story about George Prince, one of the early founders of Synecticsworld, and the small tent he had in his office back in the mid 1980’s.  He was experimenting with stimulating unconscious creative thought.  The tent fit just one or two people and was lined with reflective tinfoil.  Inside, the dimness of light and sound allowed for a deeper, calmer steady state.  He’d then introduce calming music and light reflecting on the tinfoil into the experiment, and compare the impact of this sensory stimulus on his own thoughts and creative journey.  His theory was that you’d look for a pattern and when you realized there was none, you would just give up and relax.

My fascination with this today is in continuing to discover ways of increasing one’s ability to tap into the unconscious and intuitive minds.  We all have an internal dialogue, a chatter that sometimes gets in the way of our ability to hear the whispers, to access the power of our unconscious.  Meditation is one way of calming that chatter and giving access to the flow, as my colleague Joe Giordano has examined through his look at Buddhist teachings and creativity and innovation.  For me, it is often after I’ve put my laptop away frustrated and tired after hours of focused work, that a flurry of inspired ideas come to me after just a few moments shooting baskets, taking a shower or lying down for a nap.  I just plant the seed of the problem I’m working on in my mind and then get “positively” distracted.  When I allow my unconscious mind to work on something my conscious mind has asked for, the answers eventually come.  In fact, I spend most of my days attempting to bring to fruition the flashes that come to in those morning moments as I wake.

When do your best ideas come to you?  If you are like many of us, including the greatest inventors, it’s when your unconscious mind can work unencumbered.  Thomas Edison, it is said (although it might be apocryphal) used a creative twist to napping to get in touch with his unconscious mind.  He would hold a ball in his hand so that when he reached a deep sleep, the ball would drop to the wooden floor, waking him at times of unconscious brilliance and increasing the odds he would remember what he had discovered.

So how else can we better learn to tap into and converse with our unconscious mind – especially if we don’t have a teepee handy?

Here are two ways that work for me.  The first I call Blind Dictation, and the second is a tried and true Synectics tool called In & Out Listening.  The former expands how I listen to the voice inside, and the latter how I listen to both others and myself.

Blind Dictation — The next time you have something thoughtful to write, try something a little different.  Dim the lights, get in a comfortable position, get your hands ready to type, then close your eyes and begin.  That’s right, I said close your eyes.  Start typing whatever comes to you.  Allow your unconscious, those fully formed or even half-formed thoughts to pour onto the page.  Resist the temptation to constantly go back and check your spelling or your grammar or even how the sentence sounds… just keep your eyes closed and moving forward.  Pretty soon you’ll be smiling as your thoughts flow from your mind directly to your fingertips unencumbered by the “get it right” tendencies of your left-brain.  Just let ‘er rip.  A channel will open up for you in a way you’ve never imagined.  There will be plenty of time for editing later.  For now, just let it flow freely.  In doing this, we bypass the filters of the often punishing internal critic we all have inside and tap into a stream of conscious where your thoughts fly.  I admit that a certain level of typing proficiency is very helpful for this. 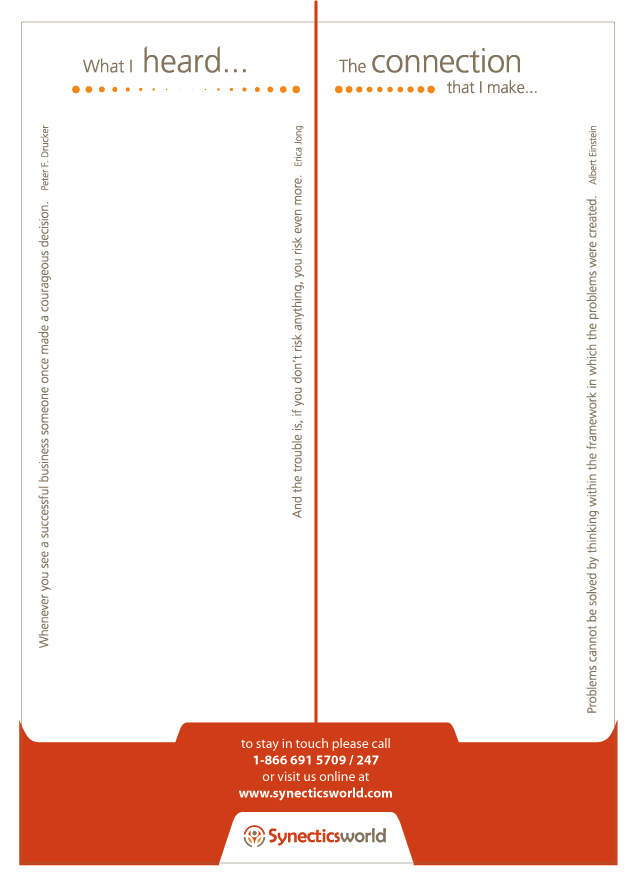 In & Out Listening  — The next time you’re observing or listening to a speaker, rather than attempting to listen throughout at full attention (an absolute impossibility as we are all natural and rapid connection-makers), listen actively and approximately for all the thoughts and connections that pop into your mind, even the seemingly absurd connections that are often the greatest source of new ideas.  When they come, instead of trying to stay fully attentive, pop “out”, play with the connections and jot them down.  This has two advantages.  First, you capture the often-fleeting fragments of new thinking before you lose them.  Second, it frees you up to come back into the conversation, and intently listen until the next connection fires across your synapses.  In & Out Listening is a way of managing both the conversation in the room as well as the unconscious conversation in your head.  One way to make this easy is to split a note pad or scratch piece of paper in half with a line down the center.  The left column represents the conversation in the room – and your normal notes – while the right column is for capturing all your creative connections and ruminations.  The right side is the real gold.

The Brisbane teepee, George’s tent, Edison’s nap trick, Blind Dictation, and In & Out Listening are just a few attempts to better tap into the power of our unconscious minds.

What are some of the ways that you tap your unconscious mind or help others to do so?  I’d love to hear them.