You are here: Home » Thinking » Creative Meetings Through Power Sharing

In 1972, George Prince, our Founder,  authored the article “Creative Meetings Through Power Sharing”, printed in the Harvard Business Review.   In re-reading the article, I was struck by the continuing relevance of George’s observations on meetings and management.  Forty years later, I do not believe the common opinion of the value of meetings has improved substantially.

In 2012, the necessity to get the absolute best out of each person in a company is paramount.  As organizations have cut costs, increased efficiency and eliminated people, a manager must optimize what he can get from those employees remaining within an organization.  George’s article illuminates behaviors that a manager should utilize to get the very best out of every member of their team. 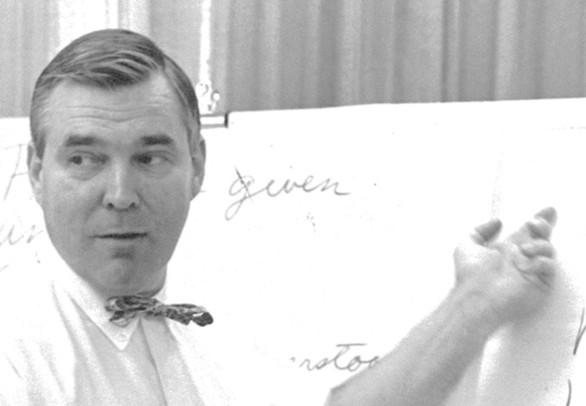 As originally published in the Harvard Business Review, July-August 1972.

Dialogues among persons, where there is a superior-subordinate relationship, are usually characterized by an implicit recognition of the superior’s authority. Whether or not he exercises that authority, all present are aware that the superior can reward or punish their actions. So, rather than speaking freely and frankly, the subordinates become conditioned to participating in a manner calculated to win his approval. The author examines the dynamics of meetings, showing how the behavior of participants can stifle initiative and inhibit the free exchange of ideas. He suggests a different approach, in which managers spur the expression of constructive ideas by sharing their power and acting as collaborators with their subordinates.

Meetings are obviously an important part of a manager’s life. In face-to-face encounters with one or more of his subordinates or peers, problems are brought up, information is shared, presentations are made, new ideas are developed, and, often, decisions are made.

One would think that meetings are an exciting and rewarding component of business life. But this is the case far too seldom. Most meetings are notable for hidden agendas, lack of candor, and waste of talent. This produces a high level of frustration and boredom for participants and a low level of accomplishment, both for the company and for those persons present.

One reason why meetings so often seem to accomplish so little ␣ and by “meeting” I am thinking particularly of a gathering involving two or more persons where there is a superior-subordinate relationship ␣ is that those present never forget that the organization’s system of reward and punishment is still operating. To put it more precisely, the manager (the superior) does not let them forget.

Most managers operate with a style that I call judgmental. It is characterized by an emphasis on the power and right of the manager to pass judgment on actions of his subordinates.

The manager may keep hands off as subordinates prepare proposals for presentation to him. Such useful devices as delegation of authority, management by objectives, and participative management attempt to augment the autonomy of the subordinate, but meaningful decisions are usually reserved to managers well up the corporate ladder. In fact, one’s right to make important decisions is the single most telling measure of status and power.

As a result, there is heavy emphasis on getting and guarding the power to decide important issues. This view of power as the right to make decisions about and comment more or less freely on actions, ideas, and proposals of subordinates puts the manager in a judgmental posture.

But as a judgmental manager he places himself in a difficult situation: if he maintains detachment in order to be fair to his subordinates, he removes himself somewhat from the action. On the other hand, if he uses his experience and skills in the usual way to involve himself in the discussion leading up to the decision to be made, he becomes a partisan. Then he is competing with his subordinates rather than playing his superior role as a manager / decision maker. In either case, much of the satisfaction of cooperative accomplishment is denied him.

In practice, the manager often walks a devious middle path. He uses persuasion and informal rewards and punishments to lead his subordinates to propose only what he can decide on favorably. But they resent his manipulation of them if they realize it. The result is misunderstanding and suspicion that make wholehearted cooperation difficult.

In my view, there is a better way of dealing with subordinates in order to obtain cooperation and further the organization’s goals. But the better way cannot be imposed from above; it requires a collaborative effort between superiors and subordinates. I shall describe an approach to establishing a climate that encourages new ideas and innovation. To read the remainder of the article, download the PDF here.